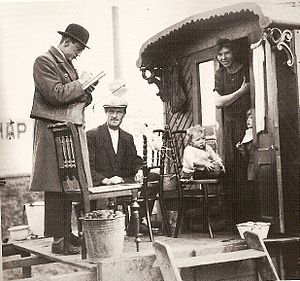 A census is the procedure of systematically acquiring and recording information about the members of a given population. It is a regularly occurring and official count of a particular population.<ref>doi: 10.1111/insr.12036</ref> The term is used mostly in connection with national population and housing censuses; other common censuses include agriculture, business, and traffic censuses. The United Nations defines the essential features of population and housing censuses as "individual enumeration, universality within a defined territory, simultaneity and defined periodicity", and recommends that population censuses be taken at least every 10 years. United Nations recommendations also cover census topics to be collected, official definitions, classifications and other useful information to co-ordinate international practice.<ref>United Nations (2008). Principles and Recommendations for Population and Housing Censuses. Statistical Papers: Series M No. 67/Rev.2. p8. ISBN 978-92-1-161505-0.</ref><ref>{{#invoke:citation/CS1|citation |CitationClass=web }}</ref>

The word is of Latin origin; during the Roman Republic, the census was a list that kept track of all adult males fit for military service. The modern census is essential to international comparisons of any kind of statistics, and censuses collect data on many attributes of a population, not just how many people there are but now census takes its place within a system of surveys where it typically began as the only national demographic data collection. Although population estimates remain an important function of a census, including exactly the geographic distribution of the population, statistics can be produced about combinations of attributes e.g. education by age and sex in different regions. Current administrative data systems allow for other approaches to enumeration with the same level of detail but raise concerns about privacy and the possibility of biasing estimates.

The United Nations Population Fund (UNFPA) explains that, “A traditional population and housing census requires mapping an entire country, figuring out what technologies should be employed, mobilizing and training legions of enumerators, conducting a major public campaign, canvassing all households, collecting individual information, compiling hundreds of thousands – or millions – of completed questionnaires, monitoring procedures and results, and analyzing and disseminating the data.” <ref name="unfpa.org">http://www.unfpa.org/census</ref>

A census can be contrasted with sampling in which information is obtained only from a subset of a population, typically main population estimates are updated by such intercensal estimates. Modern census data are commonly used for research, business marketing, and planning, and as a baseline for designing sample surveys by providing a sampling frame such as an address register. Census counts are necessary to adjust samples to be representative of a population by weighting them as is common in opinion polling. Similarly, stratification requires knowledge of the relative sizes of different population strata which can be derived from census enumerations. In some countries, the census provides the official counts used to apportion the number of elected representatives to regions (sometimes controversially – e.g., Utah v. Evans). In many cases, a carefully chosen random sample can provide more accurate information than attempts to get a population census,.<ref>Mittal, Vikas, Sample Design for Customer-Focused Research (July 30, 2015). Available at SSRN: http://ssrn.com/abstract=2638086</ref><ref>Salant, Priscilla, and Don A. Dillman. "How to Conduct your own Survey: Leading professional give you proven techniques for getting reliable results." (1995).</ref>