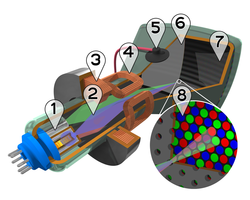 The cathode ray tube (CRT) is a vacuum tube containing one or more electron guns, and a phosphorescent screen used to view images.<ref name='crthistory'>{{#invoke:citation/CS1|citation |CitationClass=web }}</ref> It has a means to accelerate and deflect the electron beam(s) onto the screen to create the images. The images may represent electrical waveforms (oscilloscope), pictures (television, computer monitor), radar targets or others. CRTs have also been used as memory devices, in which case the visible light emitted from the fluorescent material (if any) is not intended to have significant meaning to a visual observer (though the visible pattern on the tube face may cryptically represent the stored data).

The CRT uses an evacuated glass envelope which is large, deep (i.e. long from front screen face to rear end), fairly heavy, and relatively fragile. As a matter of safety, the face is typically made of thick lead glass so as to be highly shatter-resistant and to block most X-ray emissions, particularly if the CRT is used in a consumer product.

Since the mid 2000s, CRTs have largely been superseded by newer display technologies such as LCD, plasma display, and OLED, which have lower manufacturing costs, power consumption, weight and bulk.

In television sets and computer monitors, the entire front area of the tube is scanned repetitively and systematically in a fixed pattern called a raster. An image is produced by controlling the intensity of each of the three electron beams, one for each additive primary color (red, green, and blue) with a video signal as a reference.<ref name='workings'>{{#invoke:citation/CS1|citation |CitationClass=web }}</ref> In all modern CRT monitors and televisions, the beams are bent by magnetic deflection, a varying magnetic field generated by coils and driven by electronic circuits around the neck of the tube, although electrostatic deflection is commonly used in oscilloscopes, a type of diagnostic instrument.<ref name='workings' /> 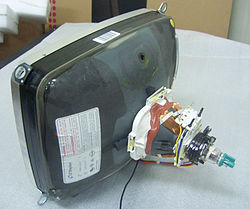 A flat CRT assembly inside a 1984 Sinclair FTV1 pocket TV