Ionic capital, from the temple of Athena Polias, Priene, Ionia, in a 19th-century engraving 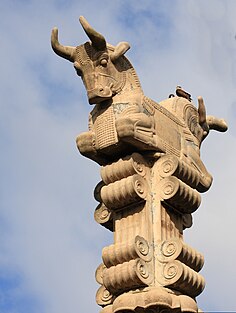 Column capital from the magnificent ancient Persian city of Persepolis

In architecture the capital (from the Latin caput, or "head", Greek kapita) forms the topmost member of a column (or a pilaster). It mediates between the column and the load thrusting down upon it, broadening the area of the column's supporting surface. The capital, projecting on each side as it rises to support the abacus, joins the usually square abacus and the usually circular shaft of the column. The capital may be convex, as in the Doric order; concave, as in the inverted bell of the Corinthian order; or scrolling out, as in the Ionic order. These form the three principal types on which all capitals are based. The Composite order (illustration, right), established in the 16th century on a hint from the Arch of Titus, adds Ionic volutes to Corinthian acanthus leaves.

From the highly visible position it occupies in all colonnaded monumental buildings, the capital is often selected for ornamentation; and is often the clearest indicator of the architectural order. The treatment of its detail may be an indication of the building's date.