Birth in mammals Large mammals, such as primates, cattle, horses, some antelopes, giraffes, hippopotamuses, rhinoceroses, elephants, seals, whales, dolphins, and porpoises, generally are pregnant with one offspring at a time; although, they may have twin or multiple births on occasion. In these large animals, the birth process is similar to that of a human though in most, the offspring is precocial. This means that it is born in a more advanced state than a human baby and is able to stand, walk and run (or swim in the case of an aquatic mammal) shortly after birth.<ref name=Dorit/> In the case of whales, dolphins and porpoises, the single calf is normally born tail first which minimises the risk of drowning.<ref>Mark Simmonds, Whales and Dolphins of the World, New Holland Publishers (2007), Ch. 1, p. 32 ISBN 1845378202.</ref> The mother encourages the newborn calf to rise to the surface of the water to breathe.<ref>{{#invoke:citation/CS1|citation |CitationClass=web }}</ref>

Most smaller mammals have multiple births, producing litters of young which may number twelve or more. In these animals, each fetus is surrounded by its own amniotic sac and has a separate placenta. This separates from the wall of the uterus during labor and the fetus works its way towards the birth canal.{{ safesubst:#invoke:Unsubst||date=__DATE__ |$B= {{#invoke:Category handler|main}}{{#invoke:Category handler|main}}[citation needed] }}

An illustration of normal head-first presentation by the obstetrician William Smellie from about 1792. The membranes have ruptured and the cervix is fully dilated.

Humans usually produce a single offspring at a time. The mother's body is prepared for birth by hormones produced by the pituitary gland, the ovary and the placenta.<ref name=Dorit>{{#invoke:citation/CS1|citation |CitationClass=book }}</ref> The total gestation period from fertilization to birth is normally about 38 weeks (birth usually occurring 40 weeks after the last menstrual period). The normal process of childbirth takes several hours and has three stages. The first stage starts with a series of involuntary contractions of the muscular walls of the uterus and gradual dilation of the cervix. The active phase of the first stage starts when the cervix is dilated more than about 4 cm in diameter and is when the contractions become stronger and regular. The head (or the buttocks in a breech birth) of the baby is pushed against the cervix, which gradually dilates until is fully dilated at 10 cm diameter. At some time, the amniotic sac bursts and the amniotic fluid escapes (also known as rupture of membranes or breaking the water).<ref>NICE (2007). Section 1.6, Normal labour: first stage</ref> In stage two, starting when the cervix is fully dilated, strong contractions of the uterus and active pushing by the mother expels the baby out through the vagina, which during this stage of labour is called a birth canal as this passage contains a baby, and the baby is born with umbilical cord attached.<ref>NICE (2007). Section 1.7, Normal labour: second stage</ref> In stage three, which begins after the birth of the baby, further contractions expel the placenta, amniotic sac, and the remaining portion of the umbilical cord usually within a few minutes.<ref>NICE (2007). Section 1.8, Normal labour: third stage</ref>

Enormous changes take place in the newborn's circulation to enable breathing in air. In the uterus, the unborn baby is dependent on circulation of blood through the placenta for sustenance including gaseous exchange and the unborn baby's blood bypasses the lungs by flowing though the foramen ovale, which is a hole in the septum dividing the right atrium and left atrium. After birth the umbilical cord is clamped and cut, the baby starts to breathe air, and blood from the right ventricle starts to flow to the lungs for gaseous exchange and oxygenated blood returns to the left atrium, which is pumped into the left ventricle, and then pumped into the main arterial system. As result of these changes, the blood pressure in the left atrium exceeds the pressure in the right atrium, and this pressure difference forces the foramen ovale to close separating the left and right sides of the heart. The umbilical vein, umbilical arteries, ductus venosus and ductus arteriosus are not needed for life in air and in time these vessels become ligaments (embryonic remnants).<ref>{{#invoke:citation/CS1|citation |CitationClass=book }}</ref>

Birthing in cattle is typical of a larger mammal. A cow goes through three stages of labor during normal delivery of a calf. During stage one, the animal seeks a quiet place away from the rest of the herd. Hormone changes cause soft tissues of the birth canal to relax as the mother's body prepares for birth. The contractions of the uterus are not obvious externally, but the cow may be restless. She may appear agitated, alternating between standing and lying down, with her tail slightly raised and her back arched. The fetus is pushed toward the birth canal by each contraction and the cow's cervix gradually begins to dilate. Stage one may last several hours, and ends when the cervix is fully dilated. Stage two can be seen to be underway when there is external protrusion of the amniotic sac through the vulva, closely followed by the appearance of the calf's front hooves and head in a front presentation (or occasionally the calf's tail and rear end in a posterior presentation).<ref name=Alberta/> During the second stage, the cow will usually lie down on her side to push and the calf progresses through the birth canal. The complete delivery of the calf (or calves in a multiple birth) signifies the end of stage two. The cow scrambles to her feet (if lying down at this stage), turns round and starts vigorously licking the calf. The calf takes its first few breaths and within minutes is struggling to rise to its feet. The third and final stage of labor is the delivery of the placenta, which is usually expelled within a few hours and is often eaten by the normally herbivorous cow.<ref name=Alberta>{{#invoke:citation/CS1|citation |CitationClass=web }}</ref><ref name=ohio>{{#invoke:citation/CS1|citation |CitationClass=web }}</ref>

In the dog, as birth approaches, contractions become more frequent. The amniotic sac looking like a glistening grey balloon, with a puppy inside, is propelled through the vulva. After further contractions, the sac is expelled and the bitch breaks the membranes releasing clear fluid and exposing the puppy. The mother chews at the umbilical cord and licks the puppy vigorously, which stimulates it to breathe. If the puppy has not taken its first breath within about six minutes, it is likely to die. Further puppies follow in a similar way one by one usually with less straining than the first. The mother will then usually eat the afterbirth.<ref name=petmd>{{#invoke:citation/CS1|citation |CitationClass=web }}</ref> 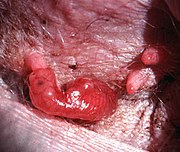 A kangaroo joey firmly attached to a nipple inside the pouch

An infant marsupial is born in a very immature state. The gestation period is usually shorter than the intervals between oestrus periods. During gestation there is no placenta but the fetus is contained in a little yellow sac and feeds on a yolk. The first sign that a birth is imminent is the mother cleaning out her pouch. When it is born, the infant is pink, blind, furless and a few centimetres long. It has nostrils in order to breathe and forelegs to cling onto its mother's hairs but its hind legs are undeveloped. It crawls through its mother's fur and makes its way into the pouch. Here it fixes onto a teat which swells inside its mouth. It stays attached to the teat for several months until it is sufficiently developed to emerge.<ref>{{#invoke:citation/CS1|citation |CitationClass=web }}</ref>