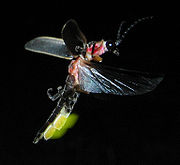 Bioluminescence is the production and emission of light by a living organism. It is a form of chemiluminescence. Bioluminescence occurs widely in marine vertebrates and invertebrates, as well as in some fungi, microorganisms including some bioluminescent bacteria and terrestrial invertebrates such as fireflies. In some animals, the light is produced by symbiotic organisms such as Vibrio bacteria.

The principal chemical reaction in bioluminescence involves the light-emitting pigment luciferin and the enzyme luciferase, assisted by other proteins such as aequorin in some species. The enzyme catalyzes the oxidation of luciferin. In some species, the type of luciferin requires cofactors such as calcium or magnesium ions, and sometimes also the energy-carrying molecule adenosine triphosphate (ATP). In evolution, luciferins vary little: one in particular, coelenterazine, is found in nine different animal (phyla), though in some of these, the animals obtain it through their diet. Conversely, luciferases vary widely in different species. Bioluminescence has arisen over forty times in evolutionary history.

Both Aristotle and Pliny the Elder mentioned that damp wood sometimes gives off a glow and many centuries later Robert Boyle showed that oxygen was involved in the process, both in wood and in glow-worms. It was not until the late nineteenth century that bioluminescence was properly investigated. The phenomenon is widely distributed among animal groups, especially in marine environments where dinoflagellates cause phosphorescence in the surface layers of water. On land it occurs in fungi, bacteria and some groups of invertebrates, including insects.

The uses of bioluminescence by animals include counter-illumination camouflage, mimicry of other animals, for example to lure prey, and signalling to other individuals of the same species, such as to attract mates. In the laboratory, luciferase-based systems are used in genetic engineering and for biomedical research. Other researchers are investigating the possibility of using bioluminescent systems for street and decorative lighting, and a bioluminescent plant has been created.