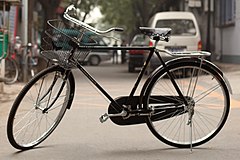 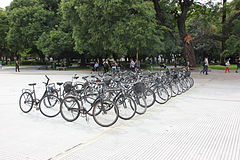 Group of bicycles of various types and sizes (in Buenos Aires).

A bicycle, often called a bike or cycle, is a human-powered, pedal-driven, single-track vehicle, having two wheels attached to a frame, one behind the other. A bicycle rider is called a cyclist, or bicyclist.

Bicycles were introduced in the 19th century in Europe and, as of 2003[update], more than a billion have been produced worldwide, twice as many as the number of automobiles that have been produced.<ref>{{#invoke:citation/CS1|citation |CitationClass=web }}</ref> They are the principal means of transportation in many regions. They also provide a popular form of recreation, and have been adapted for use as children's toys, general fitness, military and police applications, courier services, and bicycle racing.

The bicycle's invention has had an enormous effect on society, both in terms of culture and of advancing modern industrial methods. Several components that eventually played a key role in the development of the automobile were initially invented for use in the bicycle, including ball bearings, pneumatic tires, chain-driven sprockets, and tension-spoked wheels.<ref>Heitmann JA. The Automobile and American Life. McFarland, 2009, ISBN 0-7864-4013-9, pp. 11 and following</ref>