{{#invoke:Hatnote|hatnote}} {{ safesubst:#invoke:Unsubst||$N=Merge from |date=__DATE__ |$B= {{#invoke:Message box|mbox}} }} Belief is the state of mind in which a person thinks something to be the case, with or without there being empirical evidence to prove that something is the case with factual certainty. In other words, belief is when someone thinks something is reality, true, when they have no absolute verified foundation for their certainty of the truth or realness of something.<ref>Oxford Dictionaries - definition published by OUP [Retrieved 2015-08-08]</ref> Another way of defining belief is, it is a mental representation of an attitude positively orientated towards the likelihood of something being true.<ref>{{#invoke:citation/CS1|citation |CitationClass=citation }}</ref> In the context of Ancient Greek thought, two related concepts were identified with regards to the concept of belief: pistis and doxa. Simplified, we may say that pistis refers to trust and confidence, while doxa refers to opinion and acceptance. The English word doctrine is derived from doxa. 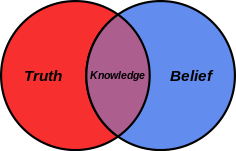 A Venn/Euler diagram which grants that truth and belief may be distinguished and that their intersection is knowledge. Unsurprisingly, this is a controversial analysis.