Author of a written or legally copied work::Author

Author of a written or legally copied work

A copyright certificate certifying the authorship for a proof of the Fermat theorem, issued by the State Department of Intellectual Property of Ukraine.

In copyright law, there is a necessity for little flexibility as to what constitutes authorship. The United States Copyright Office defines copyright as "a form of protection provided by the laws of the United States (title 17, U.S. Code) to authors of "original works of authorship".<ref>{{#invoke:citation/CS1|citation |CitationClass=citation }}</ref> Holding the title of "author" over any "literary, dramatic, musical, artistic, [or] certain other intellectual works" give rights to this person, the owner of the copyright, exclusive right to do or authorize any production or distribution of their work. Any person or entity wishing to use intellectual property held under copyright must receive permission from the copyright holder to use this work, and often will be asked to pay for the use of copyrighted material. After a fixed amount of time, the copyright expires on intellectual work and it enters the public domain, where it can be used without limit. Copyright law has been amended time and time again since the inception of the law to extend the length of this fixed period where the work is exclusively controlled by the copyright holder. However, copyright is merely the legal reassurance that one owns his/her work. Technically, someone owns their work from the time it's created. An interesting aspect of authorship emerges with copyright in that it can be passed down to another upon one's death. The person who inherits the copyright is not the author, but enjoys the same legal benefits.

Questions arise as to the application of copyright law. How does it, for example, apply to the complex issue of fan fiction? If the media agency responsible for the authorized production allows material from fans, what is the limit before legal constraints from actors, music, and other considerations, come into play? As well, how does copyright apply to fan-generated stories for books? What powers do the original authors, as well as the publishers, have in regulating or even stopping the fan fiction? 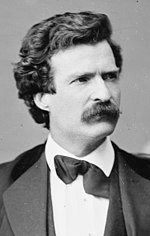 Mark Twain was a prominent American author in multiple genres including fiction and journalism during the 19th century.

In literary theory, critics find complications in the term "author" beyond what constitutes authorship in a legal setting. In the wake of postmodern literature, critics such as Roland Barthes and Michel Foucault have examined the role and relevance of authorship to the meaning or interpretation of a text.

Barthes challenges the idea that a text can be attributed to any single author. He writes, in his essay "Death of the Author" (1968), that "it is language which speaks, not the author".<ref name="barthes">{{#invoke:citation/CS1|citation |CitationClass=citation }}</ref> The words and language of a text itself determine and expose meaning for Barthes, and not someone possessing legal responsibility for the process of its production. Every line of written text is a mere reflection of references from any of a multitude of traditions, or, as Barthes puts it, "the text is a tissue of quotations drawn from the innumerable centres of culture"; it is never original.<ref name="barthes"/> With this, the perspective of the author is removed from the text, and the limits formerly imposed by the idea of one authorial voice, one ultimate and universal meaning, are destroyed. The explanation and meaning of a work does not have to be sought in the one who produced it, "as if it were always in the end, through the more or less transparent allegory of the fiction, the voice of a single person, the author 'confiding' in us".<ref name="barthes"/> The psyche, culture, fanaticism of an author can be disregarded when interpreting a text, because the words are rich enough themselves with all of the traditions of language. To expose meanings in a written work without appealing to the celebrity of an author, their tastes, passions, vices, is, to Barthes, to allow language to speak, rather than author.

Michel Foucault argues in his essay "What is an author?" (1969), that all authors are writers, but not all writers are authors. He states that "a private letter may have a signatory—it does not have an author".<ref name="foucault">{{#invoke:citation/CS1|citation |CitationClass=citation }}</ref> For a reader to assign the title of author upon any written work is to attribute certain standards upon the text which, for Foucault, are working in conjunction with the idea of "the author function".<ref name="foucault"/> Foucault's author function is the idea that an author exists only as a function of a written work, a part of its structure, but not necessarily part of the interpretive process. The author's name "indicates the status of the discourse within a society and culture", and at one time was used as an anchor for interpreting a text, a practice which Barthes would argue is not a particularly relevant or valid endeavor.<ref name="foucault"/>

Expanding upon Foucault's position, Alexander Nehamas writes that Foucault suggests "an author [...] is whoever can be understood to have produced a particular text as we interpret it", not necessarily who penned the text.<ref>{{#invoke:citation/CS1|citation |CitationClass=citation }}</ref> It is this distinction between producing a written work and producing the interpretation or meaning in a written work that both Barthes and Foucault are interested in. Foucault warns of the risks of keeping the author's name in mind during interpretation, because it could affect the value and meaning with which one handles an interpretation.

Literary critics Barthes and Foucault suggest that readers should not rely on or look for the notion of one overarching voice when interpreting a written work, because of the complications inherent with a writer's title of "author." They warn of the dangers interpretations could suffer from when associating the subject of inherently meaningful words and language with the personality of one authorial voice. Instead, readers should allow a text to be interpreted in terms of the language as "author."