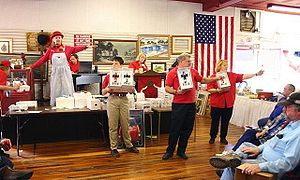 An auctioneer and her assistants scan the crowd for bidders.

An auction is a process of buying and selling goods or services by offering them up for bid, taking bids, and then selling the item to the highest bidder. The open ascending price auction is arguably the most common form of auction in use today.<ref name="#Krishna2002|Krishna, 2002: p2" /> Participants bid openly against one another, with each subsequent bid required to be higher than the previous bid.<ref name="McAfee">{{#invoke:citation/CS1|citation |CitationClass=citation }}</ref> An auctioneer may announce prices, bidders may call out their bids themselves (or have a proxy call out a bid on their behalf), or bids may be submitted electronically with the highest current bid publicly displayed.<ref name="McAfee" /> In a Dutch auction, the auctioneer begins with a high asking price for some quantity of like items; the price is lowered until a participant is willing to accept the auctioneer's price for some quantity of the goods in the lot or until the seller's reserve price is met.<ref name="McAfee" />While auctions are most associated in the public imagination with the sale of antiques, paintings, rare collectibles and expensive wines, auctions are also used for commodities, livestock, radio spectrum and used cars. In economic theory, an auction may refer to any mechanism or set of trading rules for exchange.