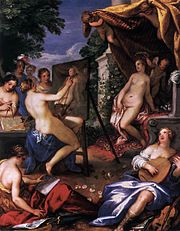 Hans Rottenhammer, Allegory of the Arts (second half of the 16th century). Gemäldegalerie, Berlin

The arts represent an outlet of expression, that is usually influenced by culture and which in turn helps to change culture. As such, the arts are a physical manifestation of the internal creative impulse. Major constituents of the arts include literature – including poetry, novels and short stories, and epics; performing arts – among them music, dance, and theatre; culinary arts such as baking, chocolatiering, and winemaking; media arts like photography and cinematography, and visual arts – including drawing, painting, ceramics, and sculpting. Some art forms combine a visual element with performance (e.g. film) and the written word (e.g. comics).

From prehistoric cave paintings to modern day films, art serves as a vessel for storytelling and conveying mankind's relationship with its environment.