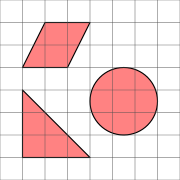 The combined area of these three shapes is approximately 15.57 squares.

The area of a shape can be measured by comparing the shape to squares of a fixed size.<ref name=AF/> In the International System of Units (SI), the standard unit of area is the square metre (written as m2), which is the area of a square whose sides are one metre long.<ref name=B>Bureau International des Poids et Mesures Resolution 12 of the 11th meeting of the CGPM (1960), retrieved 15 July 2012</ref> A shape with an area of three square metres would have the same area as three such squares. In mathematics, the unit square is defined to have area one, and the area of any other shape or surface is a dimensionless real number.

There are several well-known formulas for the areas of simple shapes such as triangles, rectangles, and circles. Using these formulas, the area of any polygon can be found by dividing the polygon into triangles.<ref name=bkos>{{#invoke:citation/CS1|citation |CitationClass=book }}</ref> For shapes with curved boundary, calculus is usually required to compute the area. Indeed, the problem of determining the area of plane figures was a major motivation for the historical development of calculus.<ref>{{#invoke:citation/CS1|citation |CitationClass=book }}</ref>

Area plays an important role in modern mathematics. In addition to its obvious importance in geometry and calculus, area is related to the definition of determinants in linear algebra, and is a basic property of surfaces in differential geometry.<ref name="doCarmo">do Carmo, Manfredo. Differential Geometry of Curves and Surfaces. Prentice-Hall, 1976. Page 98, ISBN 978-0-13-212589-5</ref> In analysis, the area of a subset of the plane is defined using Lebesgue measure,<ref name="Rudin">Walter Rudin, Real and Complex Analysis, McGraw-Hill, 1966, ISBN 0-07-100276-6.</ref> though not every subset is measurable.<ref>Gerald Folland, Real Analysis: modern techniques and their applications, John Wiley & Sons, Inc., 1999,Page 20,ISBN 0-471-31716-0</ref> In general, area in higher mathematics is seen as a special case of volume for two-dimensional regions.<ref name=MathWorld/>

Area can be defined through the use of axioms, defining it as a function of a collection of certain plane figures to the set of real numbers. It can be proved that such a function exists.