Evolution of the anchor The earliest anchors were probably rocks, and many rock anchors have been found dating from at least the Bronze Age.<ref>Johnstone, Paul and McGrail, Seán (1989). The sea-craft of prehistory. London: Routledge. ISBN 978-0-415-02635-2, p.82.</ref> Pre-European Maori waka (canoes) used one or more hollowed stones, tied with flax ropes, as anchors. Many modern moorings still rely on a large rock as the primary element of their design. However, using pure mass to resist the forces of a storm only works well as a permanent mooring; a large enough rock would be nearly impossible to move to a new location.

The ancient Greeks used baskets of stones, large sacks filled with sand, and wooden logs filled with lead. According to Apollonius Rhodius and Stephen of Byzantium, anchors were formed of stone, and Athenaeus states that they were also sometimes made of wood. Such anchors held the vessel merely by their weight and by their friction along the bottom. Iron was afterwards introduced for the construction of anchors, and an improvement was made by forming them with teeth, or "flukes", to fasten themselves into the bottom.

The Admiralty Pattern, "A.P.", or simply "Admiralty", and also known as "Fisherman", is the anchor shape most familiar to non-sailors. It consists of a central shank with a ring or shackle for attaching the rode. At the other end of the shank there are two arms, carrying the flukes, while the stock is mounted to the other end, at ninety degrees to the arms. When the anchor lands on the bottom, it will generally fall over with the arms parallel to the seabed. As a strain comes onto the rode, the stock will dig into the bottom, canting the anchor until one of the flukes catches and digs into the bottom.

This basic design remained unchanged for centuries, with the most significant changes being to the overall proportions, and a move from stocks made of wood to iron stocks in the late 1830s and early 1840s. Since one fluke always protrudes up from the set anchor, there is a great tendency of the rode to foul the anchor as the vessel swings due to wind or current shifts. When this happens, the anchor may be pulled out of the bottom, and in some cases may need to be hauled up to be re-set. In the mid-19th century, numerous modifications were attempted to alleviate these problems, as well as improve holding power, including one-armed mooring anchors. The most successful of these patent anchors, the Trotman Anchor, introduced a pivot where the arms join the shank, allowing the "idle" arm to fold against the shank.

The stockless anchor, patented in England in 1821,<ref name=Brit>"anchor" in The New Encyclopædia Britannica. Chicago: Encyclopædia Britannica Inc., 15th edn., 1992, Vol. 1, pp. 377-8.</ref> represented the first significant departure in anchor design in centuries. Though their holding-power-to-weight ratio is significantly lower than admiralty pattern anchors, their ease of handling and stowage aboard large ships led to almost universal adoption. In contrast to the elaborate stowage procedures for earlier anchors, stockless anchors are simply hauled up until they rest with the shank inside the hawsepipes, and the flukes against the hull (or inside a recess in the hull).

While there are numerous variations, stockless anchors consist of a set of heavy flukes connected by a pivot or ball and socket joint to a shank. Cast into the crown of the anchor is a set of tripping palms, projections that drag on the bottom, forcing the main flukes to dig in. 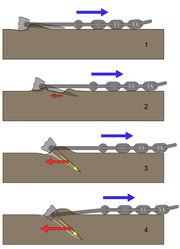 The action of a stockless anchor being set