Colored plastic inserts on a modern anchor chain show the operator how much chain has been paid out. This knowledge is very important in all anchoring methods

The basic anchoring consists of determining the location, dropping the anchor, laying out the scope, setting the hook, and assessing where the vessel ends up. The ship will seek a location which is sufficiently protected; has suitable holding ground, enough depth at low tide and enough room for the boat to swing.

Once the desired scope is laid out, the vessel should be gently forced astern, usually using the auxiliary motor but possibly by backing a sail. A hand on the anchor line may telegraph a series of jerks and jolts, indicating the anchor is dragging, or a smooth tension indicative of digging in. As the anchor begins to dig in and resist backward force, the engine may be throttled up to get a thorough set. If the anchor continues to drag, or sets after having dragged too far, it should be retrieved and moved back to the desired position (or another location chosen.)

There are techniques of anchoring to limit the swing of a vessel if the anchorage has limited room:

Lowering a concentrated, heavy weight down the anchor line – rope or chain – directly in front of the bow to the seabed behaves like a heavy chain rode and lowers the angle of pull on the anchor.<ref>Hinz, Earl R.; The Complete Book of Anchoring and Mooring, first ed., 1986, Cornell Maritime Press; ISBN 0-87033-348-8</ref> If the weight is suspended off the seabed it acts as a spring or shock absorber to dampen the sudden actions that are normally transmitted to the anchor and can cause it to dislodge and drag. In light conditions, a kellet will reduce the swing of the vessel considerably. In heavier conditions these effects disappear as the rode becomes straightened and the weight ineffective. Known as a "anchor chum weight" or "angel" in the UK.

Using two anchors set approximately 45° apart, or wider angles up to 90°, from the bow is a strong mooring for facing into strong winds. To set anchors in this way, first one anchor is set in the normal fashion. Then, taking in on the first cable as the boat is motored into the wind and letting slack while drifting back, a second anchor is set approximately a half-scope away from the first on a line perpendicular to the wind. After this second anchor is set, the scope on the first is taken up until the vessel is lying between the two anchors and the load is taken equally on each cable. This moor also to some degree limits the range of a vessel's swing to a narrower oval. Care should be taken that other vessels will not swing down on the boat due to the limited swing range.

(Not to be mistaken with the Bahamian moor, below.) In the bow and stern technique, an anchor is set off each the bow and the stern, which can severely limit a vessel's swing range and also align it to steady wind, current or wave conditions. One method of accomplishing this moor is to set a bow anchor normally, then drop back to the limit of the bow cable (or to double the desired scope, e.g. 8:1 if the eventual scope should be 4:1, 10:1 if the eventual scope should be 5:1, etc.) to lower a stern anchor. By taking up on the bow cable the stern anchor can be set. After both anchors are set, tension is taken up on both cables to limit the swing or to align the vessel.

Similar to the above, a Bahamian moor is used to sharply limit the swing range of a vessel, but allows it to swing to a current. One of the primary characteristics of this technique is the use of a swivel as follows: the first anchor is set normally, and the vessel drops back to the limit of anchor cable. A second anchor is attached to the end of the anchor cable, and is dropped and set. A swivel is attached to the middle of the anchor cable, and the vessel connected to that.

The vessel will now swing in the middle of two anchors, which is acceptable in strong reversing currents, but a wind perpendicular to the current may break out the anchors, as they are not aligned for this load.

Also known as tandem anchoring, in this technique two anchors are deployed in line with each other, on the same rode. With the foremost anchor reducing the load on the aft-most, this technique can develop great holding power and may be appropriate in "ultimate storm" circumstances. It does not limit swinging range, and might not be suitable in some circumstances. There are complications, and the technique requires careful preparation and a level of skill and experience above that required for a single anchor.

Statue of Peter the Great leaning on an anchor, in symbol of his shipbuilding activity (Voronezh, 1860).

Kedging or warping is a technique for moving or turning a ship by using a relatively light anchor.

In yachts, a kedge anchor is an anchor carried in addition to the main, or bower anchors, and usually stowed aft. Every yacht should carry at least two anchors – the main or bower anchor and a second lighter kedge anchor. It is used occasionally when it is necessary to limit the turning circle as the yacht swings when it is anchored, such as in a very narrow river or a deep pool in an otherwise shallow area.

For ships, a kedge may be dropped while a ship is underway, or carried out in a suitable direction by a tender or ship's boat to enable the ship to be winched off if aground or swung into a particular heading, or even to be held steady against a tidal or other stream.

Historically, it was of particular relevance to sailing warships which used them to outmaneuver opponents when the wind had dropped but might be used by any vessel in confined, shoal water to place it in a more desirable position, provided she had enough manpower.

Club hauling is an archaic technique. When a vessel is in a narrow channel or on a lee shore so that there is no room to tack the vessel in a conventional manner, an anchor attached to the lee quarter may be dropped from the lee bow. This is deployed when the vessel is head to wind and has lost headway. As the vessel gathers sternway the strain on the cable pivots the vessel around what is now the weather quarter turning the vessel onto the other tack. The anchor is then normally cut away, as it cannot be recovered.<ref>Liardet, Francis (1849) Professional Recollections on Points of Seamanship, Discipline, &c.</ref><ref>General Principles of Working a Ship, from The New Practical Navigator (1814). psych.usyd.edu.au</ref> 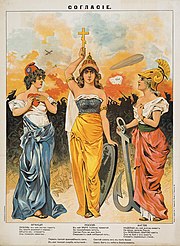 A 1914 Russian poster depicting the Triple Entente. Britannia's association with the oceanic British Empire is indicated by her holding a large anchor.