The Americas, or America,<ref>See for example: america – Definition from the Merriam-Webster Online Dictionary. Retrieved on January 27, 2008; "dictionary.reference.com america". Dictionary.com. The American Heritage Dictionary of the English Language, Fourth Edition. Houghton Mifflin Company, 2004. Accessed: January 27, 2008.</ref><ref>Marjorie Fee and Janice MacAlpine, Oxford Guide to Canadian English Usage (2008) page 36 says "In Canada, American is used almost exclusively in reference to the United States and its citizens." Others, including The New Zealand Oxford Dictionary, The Canadian Oxford Dictionary, The Australian Oxford Dictionary and The Concise Oxford English Dictionary all specify both the Americas and the United States in their definition of "American".</ref><ref name=oxfordc>"America." The Oxford Companion to the English Language (ISBN 0-19-214183-X). McArthur, Tom, ed., 1992. New York: Oxford University Press, p. 33: "[16c: from the feminine of Americus, the Latinized first name of the explorer Amerigo Vespucci (1454–1512). The name America first appeared on a map in 1507 by the German cartographer Martin Waldseemüller, referring to the area now called Brazil]. Since the 16c, a name of the western hemisphere, often in the plural Americas and more or less synonymous with the New World. Since the 18c, a name of the United States of America. The second sense is now primary in English: ... However, the term is open to uncertainties: ..."</ref> also known as the Western Hemisphere<ref name=mwgeodict>{{#invoke:citation/CS1|citation |CitationClass=citation }}.

Humans first settled the Americas from Asia between 42,000 and 17,000 years ago. A second migration of Na-Dene speakers followed later from Asia. The subsequent migration of the Inuit into the neoarctic around 3500 BCE completed what is generally regarded as the settlement by the indigenous peoples of the Americas.

The first known European settlement in the Americas was by the Norse explorer Leif Ericson.<ref>{{#invoke:citation/CS1|citation |CitationClass=news }}</ref> However the colonization never became permanent and was later abandoned. The voyages of Christopher Columbus from 1492 to 1502 resulted in permanent contact with European (and subsequently, other Old World) powers, which led to the Columbian exchange. Diseases introduced from Europe and Africa devastated the indigenous peoples, and the European powers colonised the Americas.<ref>[examiner.com/article/apocalypic-mysterious-plague-killed-millions-of-native-americans-the-1500s Examiner, 2012]</ref> Mass emigration from Europe, including large numbers of indentured servants, and forced immigration of African slaves largely replaced the indigenous peoples.

The population is approaching 1 billion, with over 65% of them living in one of the three most populous countries (the United States, Brazil, and Mexico). The most populous cities are São Paulo, Mexico City, New York City, Buenos Aires and Los Angeles. 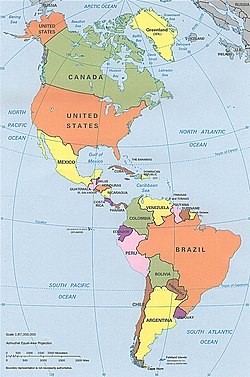