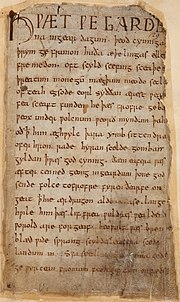 In prosody, alliterative verse is a form of verse that uses alliteration as the principal ornamental device to help indicate the underlying metrical structure, as opposed to other devices such as rhyme. The most commonly studied traditions of alliterative verse are those found in the oldest literature of the Germanic languages, where scholars use the term 'alliterative poetry' rather broadly to indicate a tradition which not only shares alliteration as its primary ornament but also certain metrical characteristics. The Old English epic Beowulf, as well as most other Old English poetry, the Old High German Muspilli, the Old Saxon Heliand, the Old Norse Poetic Edda, and many Middle English poems such as Piers Plowman, Sir Gawain and the Green Knight, and the Alliterative Morte Arthur all use alliterative verse.Unknown extension tag "ref"

Alliterative verse can be found in many other languages as well. The Finnish Kalevala and the Estonian Kalevipoeg both use alliterative forms derived from folk tradition. Traditional Turkic verse, for example that of the Uyghur, is also alliterative.