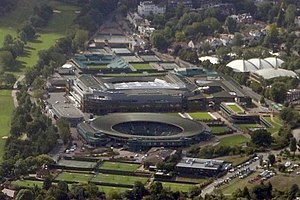 Aerial view of the All-England Club, with the circular No. 1 Court, enclosed Centre Court, and the teal No. 2 Court behind and No. 3 Court to the right

The All England Lawn Tennis and Croquet Club,<ref>{{#invoke:citation/CS1|citation |CitationClass=web }}</ref> also known as the All-England Club,<ref>Andreff, Wladimire, and Szymański, Stefan, "Handbook on the economics of sport", Edward Elgar Publishing (2006), ISBN 1-84376-608-6, ISBN 978-1-84376-608-7</ref> based at Church Road, Wimbledon, London, England, is a private members' club. It is best known as the venue for the Wimbledon Championships, the only Grand Slam tennis event still held on grass. Initially an amateur event that occupied club members and their friends for a few days each summer, the championships have become far more prominent than the club itself. However, it still operates as a members' tennis club, with many courts in use all year round.

The club has 375 full members, about 100 temporary playing members, and a number of honorary members, including past Wimbledon singles champions and people who have rendered distinguished service to the game. To become a full or temporary member, an applicant must obtain letters of support from four existing full members, two of whom must have known the applicant for at least three years. The name is then added to the Candidates' List. Honorary Members are elected from time to time by the club's Committee. Membership carries with it the right to purchase two tickets for each day of the Wimbledon Championships.<ref>"The All England Lawn Tennis Club," Wimbledon.org, accessed 29 June 2009</ref>

The patron of the club is Queen Elizabeth II, and the President is The Duke of Kent.<ref>"The All England Lawn Tennis Club" Wimbledon.org, accessed 15 July 2009</ref>