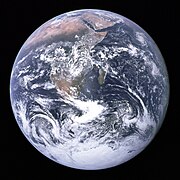 The Earth as seen from Apollo 17. The second half of the 20th century saw humankind's first space exploration.

The 20th century was a century that began on January 1, 1901<ref>"Twentieth Century's Triumphant Entry". The New York Times. January 1, 1901</ref> and ended on December 31, 2000.<ref>"When and where did the new Millennium officially start, and why?". Royal Observatory Greenwich</ref><ref>{{#invoke:citation/CS1|citation |CitationClass=web }}</ref> It was the tenth and final century of the 2nd millennium. It is distinct from the century known as the 1900s (sometimes written as 19XX), which began on January 1, 1900 and ended on December 31, 1999.

The century in human history was dominated by World War I and World War II, nationalism and decolonization, the Cold War and Post-Cold War conflicts, cultural homogenization through developments in transportation and communications technology, world population growth, awareness of environmental degradation, and the birth of the Digital Revolution. It saw great advances in communication and medical technology that by the late 1980s allowed for near-instantaneous worldwide computer communication and genetic modification of life.