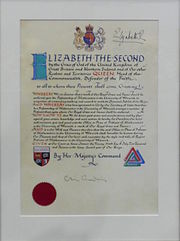 Royal warrant creating a Regius Chair in Mathematics at the University of Warwick.

Regius professorships are a unique feature of academia in the British Isles. The first Regius professorship was in the field of medicine, and founded by the Scottish King James IV at Aberdeen University in 1497. Regius chairs have since been instituted in various universities, in disciplines judged to be fundamental and for which there is a continuing and significant need. Each was established by a British monarch, and — except in Ireland since 1923 — the current monarch still officially appoints the professor (following proper advertisement and interview, through the offices of the university and the national government). This royal imprimatur, and the relative rarity of these professorships, means a Regius chair is prestigious and highly sought-after.