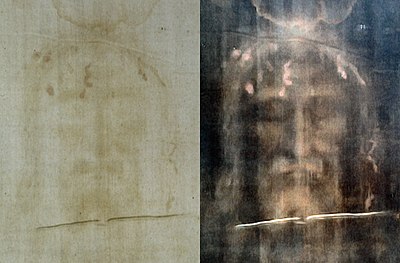 Full-length image of the Turin Shroud before the 2002 restoration.

The Shroud of Turin or Turin Shroud (Italian: Sindone di Torino{{#invoke:Category handler|main}}) is a length of linen cloth bearing the image of a man that is believed by some Christians to be the burial shroud of Jesus of Nazareth. Radiocarbon dating has dated it to the Medieval period. The shroud is kept in the royal chapel of the Cathedral of Saint John the Baptist in Turin, northern Italy.

The image is much clearer in black-and-white negative than in its natural sepia color. The negative image was first observed in 1898 on the reverse photographic plate of amateur photographer Secondo Pia, who was allowed to photograph it while it was being exhibited in the Turin Cathedral.

The origins of the shroud and its images are the subject of intense debate among theologians, historians and researchers. Scientific and popular publications have presented diverse arguments for both authenticity and possible methods of forgery. A variety of scientific theories regarding the shroud have since been proposed, based on disciplines ranging from chemistry to biology and medical forensics to optical image analysis. The Shroud of Turin is respected by Christians of several traditions, including Baptists, Catholics, Lutherans, Methodists, Orthodox, Pentecostals, and Presbyterians.<ref name="The Rev. Albert R. Dreisbach 1997">{{#invoke:citation/CS1|citation |CitationClass=web }}</ref> The Catholic Church has neither formally endorsed nor rejected the shroud, but in 1958 Pope Pius XII approved of the image in association with the devotion to the Holy Face of Jesus.<ref>Joan Carroll Cruz, Saintly Men of Modern Times, Our Sunday Visitor, 2003, ISBN 1-931709-77-7, page 200.</ref> More recently, Pope Francis and his predecessor Pope Benedict XVI have both described the Shroud of Turin as "an icon"<ref>Pope Francis and the Shroud of Turin</ref> and Pope Saint John Paul II called the Shroud "a mirror of the Gospel".<ref>Pastoral Visit of His Holiness John Paul II to Vercelli and Turin, Italy, 23–24 May 1998 [1]</ref>

In 1988 a radiocarbon dating test was performed on small samples of the shroud. The laboratories at the University of Oxford, the University of Arizona, and the Swiss Federal Institute of Technology concurred that the samples they tested dated from the Middle Ages, between 1260 and 1390. The validity and the interpretation of the 1988 tests are still contested by some statisticians, chemists and historians.<ref name="Sampling1">R.N Rogers, "Studies on the Radiocarbon Sample from the Shroud of Turin", Thermochimica Acta, Vol. 425, 2005, pp. 189–194, article; S. Benford, J. Marino, "Discrepancies in the radiocarbon dating area of the Turin shroud", Chemistry Today, vol 26 n 4 / July–August 2008, p. 4-12, article;Emmanuel Poulle, ″Les sources de l'histoire du linceul de Turin. Revue critique″, Revue d'Histoire Ecclésiastique, 2009/3-4, Abstract; G. Fanti, F. Crosilla, M. Riani, A.C. Atkinson, "A Robust statistical analysis of the 1988 Turin Shroud radiocarbon analysis" Proceedings of the IWSAI, ENEA, 2010.</ref> According to professor Christopher Ramsey of the Oxford Radiocarbon Accelerator Unit in 2011, "There are various hypotheses as to why the dates might not be correct, but none of them stack up."<ref name="blogs.telegraph.co.uk">The Turin Shroud is fake. Get over it Tom Chivers in the Daily Telegraph 20 December 2011</ref>

According to former Nature editor Philip Ball, "it's fair to say that, despite the seemingly definitive tests in 1988, the status of the Shroud of Turin is murkier than ever. Not least, the nature of the image and how it was fixed on the cloth remain deeply puzzling".<ref>{{#invoke:Citation/CS1|citation |CitationClass=journal }}</ref> The shroud continues to be one of the most studied and controversial objects in human history.<ref>According to LLoyd A. Currie, it is "widely accepted" that "the Shroud of Turin is the single most studied artifact in human history" in Lloyd A. Currie, "The Remarkable Metrological History of Radiocarbon Dating Journal of the National Institute of Standards and Technology 109, 2004, p. 200.</ref><ref name= "Article">W. Meacham, "The Authentication of the Turin Shroud, An Issue in Archeological Epistemology", Current Anthropology, 24, 3, 1983 Article</ref><ref>G.R. Habermas, 'Shroud of Turin' in G.T. Kurian (ed.), "The Encyclopedia of Christian Civilization", Wiley-Blackwell, 2011, p. 2161.</ref>