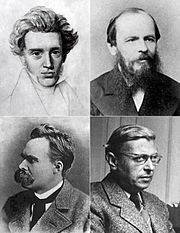 Søren Kierkegaard is generally considered to have been the first existentialist philosopher,<ref name=Crowell-SEoP/><ref>Marino, Gordon. Basic Writings of Existentialism (Modern Library, 2004, p. ix, 3).</ref><ref name=McDonald2009Stanford></ref> though he did not use the term existentialism.<ref>However he did title his 1846 book Concluding Unscientific Postscript to Philosophical Fragments, (Subtitle) A Mimical-Pathetic-Dialectical Compilation an Existential Contribution, and mentioned the term on pages 121-122, 191, 350-351, 387ff of that book. and he did, in fact, use it like this:

"All skepticism is a kind of idealism. Hence when the sceptic Zeno pursued the study of skepticism by endeavoring existentially to keep himself unaffected by whatever happened, so that when once he had gone out of his way to avoid a mad dog, he shamefacedly admitted that even a skeptical philosopher is also sometimes a man, I find nothing ridiculous in this. There is no contradiction, and the comical always lies in a contradiction. On the other hand, when one thinks of all the miserable idealistic lecture-witticisms, the jesting and coquetry in connection with playing the idealist while in the professorial chair, so that the lecturer is not really an idealist, but only plays the fashionable game of being an idealist; when one remembers the lecture-phrase about doubting everything, while occupying the lecture platform, aye, then it is impossible not to write a satire merely by recounting the facts. Through an existential attempt to be an idealist, one would learn in the course of half a year something very different from this game of hide-and-seek on the lecture platform. There is no special difficulty connected with being an idealist in the imagination; but to exist as an idealist is an extremely strenuous task, because existence itself constitutes a hindrance and an objection. To express existentially what one has understood about oneself, and in this manner to understand oneself, is in no way comical. But to understand everything except one’s own self is very comical." Soren Kierkegaard, Concluding Unscientific Postscript to Philosophical Fragments 1846 p. 315-316 translated by David F. Swenson and Walter Lowrie 1941 Fifth Printing Princeton University Press