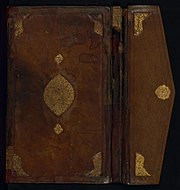 A Glossary of Islamic Legal Terminology

A glossary, also known as a vocabulary, or clavis, is an alphabetical list of terms in a particular domain of knowledge with the definitions for those terms. Traditionally, a glossary appears at the end of a book and includes terms within that book that are either newly introduced, uncommon, or specialized. While glossaries are most commonly associated with non-fiction books, in some cases, fiction novels may come with a glossary for unfamiliar terms.

A bilingual glossary is a list of terms in one language defined in a second language or glossed by synonyms (or at least near-synonyms) in another language.

In a general sense, a glossary contains explanations of concepts relevant to a certain field of study or action. In this sense, the term is related to the notion of ontology. Automatic methods have been also provided that transform a glossary into an ontology<ref>R. Navigli, P. Velardi. From Glossaries to Ontologies: Extracting Semantic Structure from Textual Definitions, Ontology Learning and Population: Bridging the Gap between Text and Knowledge (P. Buitelaar and P. Cimiano, Eds.), Series information for Frontiers in Artificial Intelligence and Applications, IOS Press, 2008, pp. 71-87.</ref> or a computational lexicon.<ref>R. Navigli. Using Cycles and Quasi-Cycles to Disambiguate Dictionary Glosses, Proc. of 12th Conference of the European Association for Computational Linguistics (EACL 2009), Athens, Greece, March 30-April 3rd, 2009, pp. 594-602.</ref>