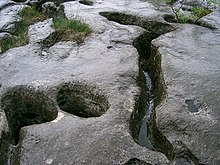 Example of panholes, which go by a variety of names, in Jura, France.

A panhole is a depressed, erosional feature found on flat or gently sloping rock. Panholes are the result of long-term weathering and are generally seen on bedrock or very large blocks of rock. Similar terms are gnamma (Australia), opferkessel (German, roughly “sacrificial basin”), “armchair hollows”, weathering pans (or pits) and solution pans (or pits). Other German names include kamenitza and kamenica. In Spanish they are tinajita. In Portuguese and Galician are called pias.

These shallow solution basins, or closed depressions, tend to form on bare limestone or silicate rock. They are also found on granitic rock. They are generally characterized by flat bottoms and sometimes by overhanging sides. The initial form may be a closed hollow created by a patch of humus. Diameters are rarely greater than 15 centimeters

The Australian aboriginal term gnamma, in particular, implies a depression capable of holding water at times.

A related concept is a "swirlhole": A hole in rock in a streambed eroded by eddying water, with or without sand or pebble abrasives. Swirlholes typically form at the bottoms of waterfalls.